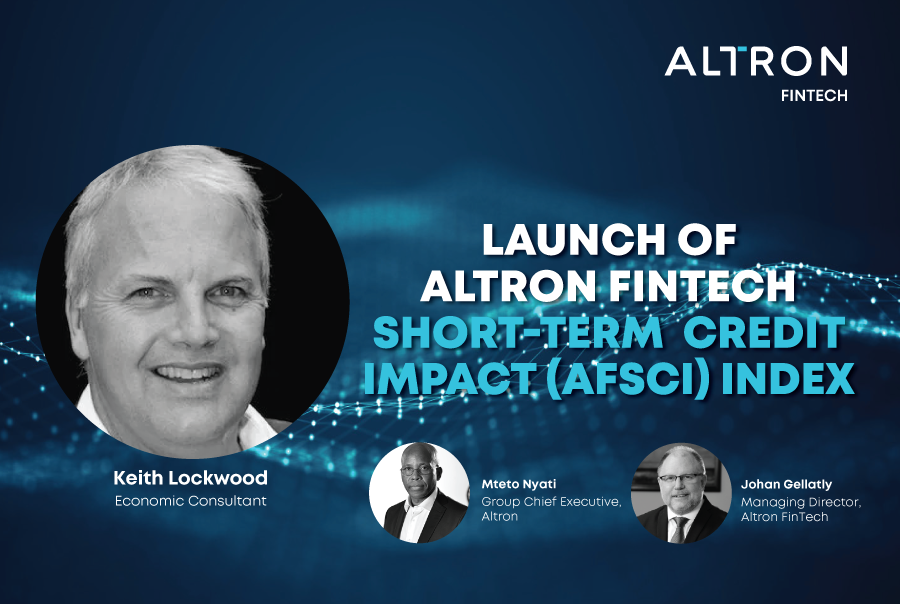 The AFSCI Index tracks the economic impact of short-term lending in South Africa, with a view to assisting credit providers in the critical micro-finance sector in their assessment of risk and credit extension, and in building a deeper understanding of the role that this form of credit plays in the South African economy and society.

The AFSCI Index has been developed on behalf of Altron FinTech by Keith Lockwood, an independent economic consultant and adjunct faculty member of the Gordon Institute of Business Science.

Johannesburg, 30 November 2021:  The extension of short-term credit, a key financial instrument for low-income households and micro businesses, increased by 8.6% between Q2 2020 and Q2 2021.  This resulted in an estimated economy-wide increase in sales of R459 million, an additional 800 jobs being created and government collecting R56 million more in taxes. The net value of short-term credit (new loans less loans repaid or written-off) was also 2.7% higher in Q2 2021 than in the previous quarter.

This is according to the results of the Q2 AFSCI, released this morning. Altron Fintech developed the AFSCI in partnership with Keith Lockwood, independent economic consultant and adjunct faculty member of the Gordon Institute of Business Science.

Keith Lockwood says:  “There could be significant upside benefit to the economy if the value of short-term credit advanced is raised by R1 billion.  Sales throughout the economy would increase by R2.9 billion, employment supported would rise by close to 50%, to over 15,000 jobs, and our government could expect to collect around R340 million in additional taxes.”

Johan Gellatly, MD of Altron Fintech agrees: “Credit is an important catalyst for economic growth. An increase in credit extension injects money that was previously out of circulation back into the economy, and thereby generates a stream of economic activity and incomes. If we want to grow the economy, and create jobs, it is clear that we need to make responsible short-term credit more accessible, particularly to lower-income households.”

Update on the consumer credit market in general

Total new credit extension by all forms of consumer credit dropped by 57% under the ‘hard’ Covid-related lockdown that occurred in Q2 2020.  Since then, the value of credit advanced recovered strongly with all forms of credit, except developmental and unsecured credit, rising to above their pre-Covid levels by the second quarter of 2021.

However, it is worth noting that in Q2 2021, 64% of all consumer credit applications were rejected.  This is largely a reflection of the fact that the financial position of the average consumer remains under pressure.

Despite some recovery as economic activity normalised in recent quarters, per capita GDP was still 7% lower, and total employment was 3% lower in Q2 2021 than in 2015.

In the year to the end of Q2 2021, the value of the short-term debtors’ book increased by R155 million to R1.95 billion.  Close to a third of this increase occurred in the latest quarter and was due to the fact that total new advances (R2.21 billion) exceeded loan repayments and write-offs (R2.16 billion) by almost R52 million in Q2 2021.  Since Q2 2020, there has also been an 83% increase in the number of new short-term loans advanced.

Between the start of 2015 and Q2 2021, the average value of short-term loans advanced increased by 48%, compared with increases in consumer prices of 34%, and GDP per capita of 31%, over the same period.  “The fact that the interest rate that can be charged by short-term credit providers is capped and there has been no adjustment to fees that can be charged since 2015 may have contributed to the relatively sharper rise in the average loan value,” says Lockwood.

After deteriorating significantly during the early stages of the pandemic, the age analysis of the consolidated debtors’ book of short-term credit providers has largely returned to pre-Covid levels.  In Q2 2021, 70% of borrowers were current in respect of their loan repayments, 14% were between 30 and 60 days in arrears, and 17% were more than 60 days in arrears.

Short-term credit advances are marked by gender parity.  An analysis of recent lending data indicates that females consistently received a slightly higher share of total credit extension (51%) than their male counterparts (49%).  This is consistent with national demographic trends.  Over the period August 2021 to October 2021 the average value of loans advanced to both genders followed similar trends and were almost identical in value.

The AFSCI Index rose to 96 in Q2 2021.  This means that short-term credit extension was making 4% less of an impact on the economy in the second quarter of 2021 than it was at the start of 2015 but 9% more of an impact than at the height of the lockdown a year earlier.  The increase in short-term credit extension in the year to Q2 2021 supported economy-wide sales of R5.8 billion, up from R5.3 billion in the previous quarter.  Just over 10,000 employment opportunities were supported and government was able to collect R706 million in taxes.

Fill in the personal details section to download the full presentation.