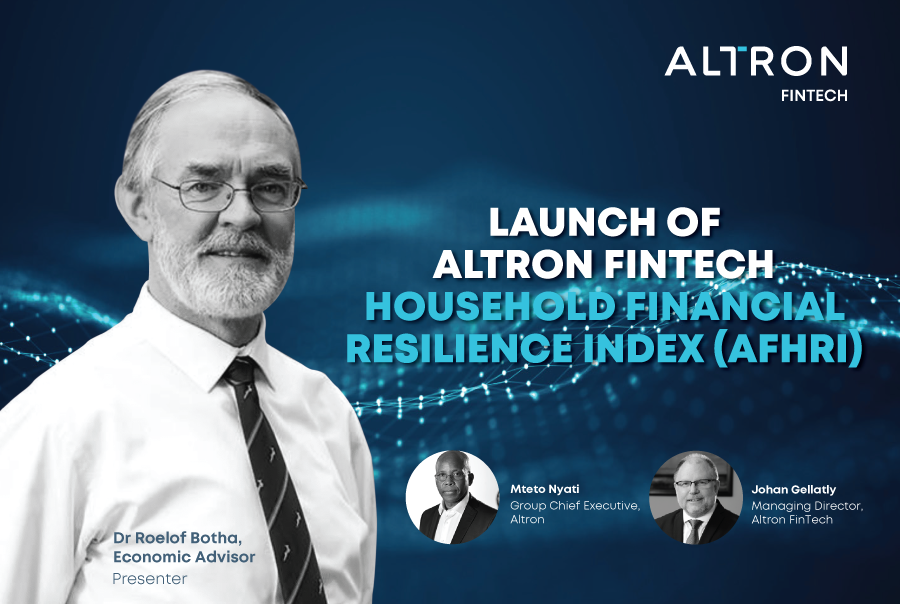 The purpose of the AFHRI index is to assess the state of micro-lending in South Africa from the perspective of the ability of borrowers to repay their loans. The data provides more clarity on the financial disposition of households and their ability to cope with debt. Please join Altron Fintech’s MD, Mr Johan Gellatly, and Dr Roelof Botha, economic advisor to the Optimum Investment Group, who developed the AFHRI on behalf of Altron Fintech for the Q2 results.

Johannesburg, 2 December 2021:  The Q2 2021 reading of the Altron Fintech Household Resilience Index (AFHRI) confirms that the average household in South Africa enjoyed a more advantageous disposition towards incurring and managing debt than before the pandemic.

This is according to the results of the Q2 2021 AFHRI Index, released this morning. Altron Fintech developed the AFHRI in partnership with Dr Roelof Botha, economic advisor to the Optimum Investment Group.

The results of the Q2 2021 AFHRI shows consistent improvement in the ratio of South African household income to debt costs, with an improvement of 20% over the past two years, and the recovery of household disposable income since the first quarter of 2021 (a 3.3% gain).

Dr Botha said: “Although most of the constituent indicators of the AFHRI have continued to recover in the second quarter, it is a point of concern that total private sector credit extension remains on a downward trajectory. This raises question marks over the recent decision by the SA Reserve Bank to raise short-term interest rates at a time when insufficient progress has been made with a recovery of job losses.

“Due to the strong positive correlation between private sector credit extension and GDP growth, it has become a matter of urgency for Government to reconsider the undue regulatory burden that has been placed on the formal microfinance sector. Unless lower income groups are allowed easier access to credit, the pace of employment creation in South Africa will remain muted.”

Johan Gellatly, MD of Altron Fintech says: “This index was developed with a key purpose of providing the market with critical insights on the level of resilience of those who apply for credit. It has specific relevance to the provision and state of micro-credit, an important segment of the overall credit market, and often the only option for individuals and small businesses.”

An econometric modelling exercise conducted in 2019 by Prof Ilse Botha from the University of Johannesburg indicated that, between the first quarter of 2015 and the third quarter of 2018, South Africa’s GDP would have been R191-billion lower in the absence of credit provided by microfinance institutions.

“The AFHRI is premised on the fact that income is ultimately required to repay debt. Without income of some kind, individuals are not able to qualify for loans that allow for expanded access to the full range of goods and services that comprise private consumption expenditure, as well as the funding of working capital required to sustain or expand small and micro businesses,” concludes Gellatly.